Divide NYS into one state with three completely autonomous regions 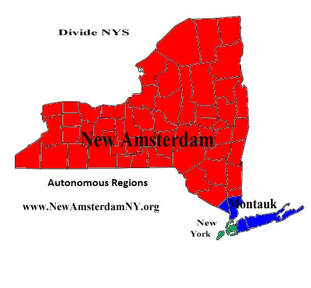 Autonomous Regions
The State of New York contains a tremendously diverse population and is unique in its dichotomy. The overwhelming majority of the state consists of small to medium sized communities set in a rural and suburban climate; generally conservative values blend with moderate liberal ideals to create a unique political platform. Meanwhile, the downstate counties that make up New York City are significantly more liberal leaning in their values and are world famous for the size and power of the most significant city in the world.
It is equally unfair to both upstate and downstate residents to share a representative government; the vast differences in lifestyle and aspirations demonstrate that both downstate and upstate should have their own autonomous governments so as to more effectively serve their constituents.
Did You Know? Divide New York Plan
The New Amsterdam & Montauk regional governments would have the power to repeal these unnecessary NYS regulations and bad laws that are killing jobs. While the New York regional government could enact those changes it wants for NYC only that upstate currently blocks .

Creating Autonomous Regions is almost the same as being separate states! Since Congress is unlikely, in the foreseeable future, to give the Northeast two more US Senate seats a new state would require; our autonomous regions method makes more sense financially and is more likely to succeed!
Click the button below for an Outline on how the draft amendment would work
Outline of Draft Amendment
===========================
Our Plan promotes Better Jobs, Lower Taxes
Our Plan's Step by step Procedure
===========================
Donate
Divide NYS Caucus Inc is a statewide group working on dividing NYS into autonomous regions

Please enter these two emails into your contacts so our messages do NOT go to your SPAM folder
Divide_nys@newamsterdamny.org and capitalchapterupstate@aol.com
Divide New York
Split the State