What will become the New Amsterdam(upstate) and Montauk(Long Island & Rockland/Westchester) regions taxes are currently high because of unfunded NYS mandates and State taxes look at the charts below for how things could be different when most of the mandates and some of taxes are eliminated by the three autonomous regions plan.

The City of New York  would  be helped by dividing into autonomous regions as follows. NYC would no longer have to send ever increasing amounts of money to other regions so it would have more money to spend in NYC. The New York region could repair the subways instead waiting for Albany to act. Albany could no longer play games with the NYC school system, and many other issues.

Comparing Small Business Costs
As you can see from charts above and below if  New Amsterdam and Montauk Regions were created and run more like PA or VT we could attract better jobs and lower taxes. The New York Region  would benefit as well because it would no longer have its tax money to other counties because they would only be used in the New York Region. 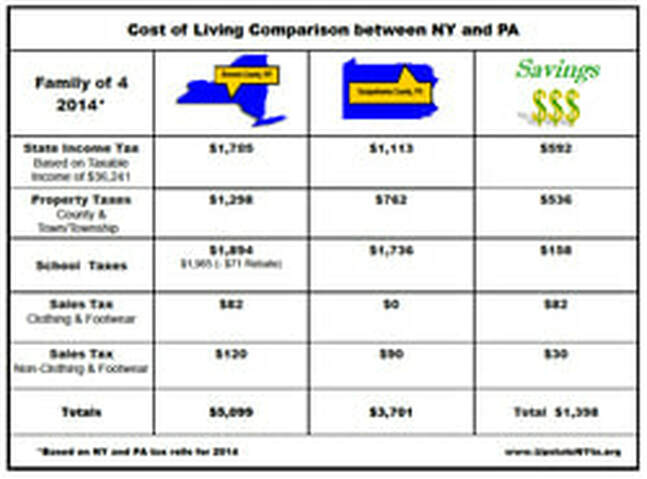 Go to the  www.upstatenyta.org/  for more charts and information
﻿   In order to support our plan two completely autonomous regions, with a token state government. Ask your county board of supervisors or county legislators to pass the following resolution. Also ask your Town/City/Village leaders to pass the resolution as well. Click button below for details.
Details on what Counties/Towns/Cities can do to help
Donate
Divide NYS Caucus Inc is a statewide group working on dividing NYS into autonomous regions

Please enter these two emails into your contacts so our messages do NOT go to your SPAM folder
Divide_nys@newamsterdamny.org and capitalchapterupstate@aol.com